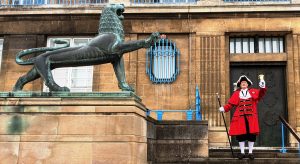 In 2010 Norwich City Council advertised for a deputy town crier to succeed David Bullock when he retired. Having recently qualified as a professional toastmaster, I decided to apply and was asked to attend an interview with David and the City Clerk. David had prepared a cry that I was asked to make from the steps of City Hall. 24 hours later I received a ‘phone call offering me the post as I had been chosen as the successful candidate.

I designed and had my livery made by a professional theatrical costume maker in Dereham, and was proud to wear it alongside David for the first time at the appointment of the newly elected Mayor.

During the next few years I fulfilled a number of engagements deputising for David at civic events. These included the Mayor making and Freemen of the City ceremonies, and leading the annual Lord Mayor’s street procession. I was also asked by various commercial companies to advertise their business on the streets of Norwich. More recently I was asked to proclaim the 150 services that Norwich council provide. Love the looks on peoples faces! https://www.bbc.co.uk/news/av/uk-england-norfolk-43840185/town-crier-explains-what-local-councils-actually-do

In January 2017, after serving the city for over 30 years David finally retired and, at a handing over ceremony in the City Hall, I was officially appointed as the Norwich City Crier. 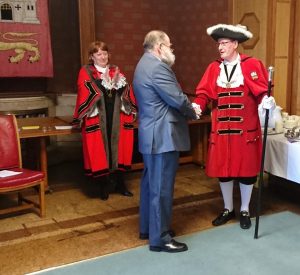 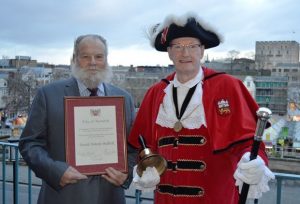 I offer local companies and individuals the opportunity to have their business or special event proclaimed to the public at large. This can be on the streets of Norwich or other towns and cities across the region. I can also attend functions to accompany the Lord Mayor of Norwich, the opening of a new shop or perhaps the local village fete.

The role of the town crier is steeped in history. In this current technological age it may seem an outdated way of advertising but it has worked very well for companies who have engaged my services. These include Archant, Tesco, House of Fraser, The Assembly House, Home Instead Senior Care, Maids Head Hotel, Norfolk Hospice, Celebrate Norwich & Norfolk, Lloyd’s Bank, Specsavers, Hotter shoes and the Whittard tea company.

When a number of town criers are gathered together in one place it called a ‘bellow’ of criers. This was the case in April 2017 when I invited town criers from Norfolk to join me in Norwich to celebrate my appointment. 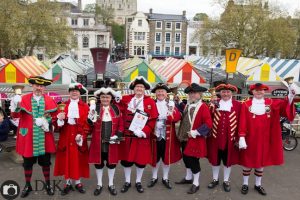 The sight and sound of the town crier attracts the attention of citizens and visitors alike who stop to listen to the proclamation. So if you have an event or function where the colourful and ‘noisy’ appearance of the town crier would make an impact please contact me to discuss your requirements and appropriate fee. I am a member of the Ancient and Honourable Guild of Town Criers.

Great to be a part of the historic promotion to the premier league for NCFC in 2019 but sadly not able to do a repeat performance for this years celebrations due to Covid restrictions. 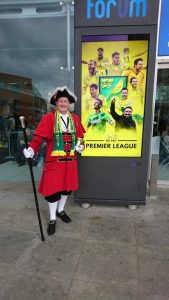 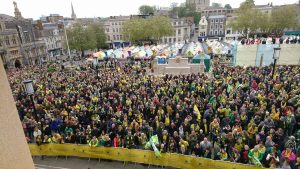 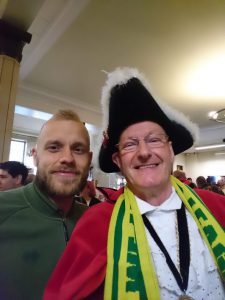 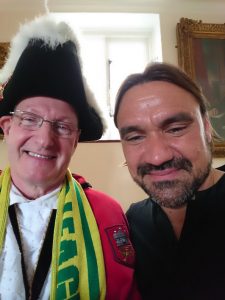 History of the Town Crier

Historically town criers – or Bellmen as they were sometimes called – were the original newsmen. The first town criers were the Spartan Runners in the early Greek Empire and as the Roman Conquest spread through Europe the position increased in importance until it became a position of the court. Town criers were particularly important when most of the population was illiterate. Though their origin is much older, the position was formalised after the Norman Conquest of 1066.

As England colonised the world, the position of the town crier spread with it. Before people could read, town criers brought the news to the people, and served as spokesmen for the King. Town criers were protected by law. “Don’t shoot the messenger” was a very real command; anything that was done to a town crier was deemed to be done to the King and was therefore a treasonable offence. Usually people of standing in the community were chosen as criers, for they had to be able to write and read the official proclamations. Often they were a husband and wife team with the wife ringing the large hand bell and the husband doing the shouting. The Town crier would read a proclamation, usually at the door of the local inn, then nail it to the doorpost of the inn. The tradition has resulted in the expression “posting a notice” and the naming of newspapers as “The Post”.

Each town crier is officially appointed by the Mayor. The style of uniforms is authentic and date back to the 17th Century. The Town crier’s robes are similar to those of the mayor, and uniforms are usually designed, incorporating the colours of the Crier’s town. The ceremonial tricorne hat is adorned with curling feathers, a traditional representation of the quills used by earlier town criers to write their proclamations.

Announcements are always preceded by the traditional “Oyez! Oyez! Oyez!” (which is “listen” in French) and conclude with “God save the Queen” .

Town Criers and bellmen were largely phased out in the early 20th Century – in part because of the growth of local newspapers and literacy rates but the position has been revived by councils all over Britain since the 1970’s. When ‘The Ancient and Honourable Guild of Town Criers was founded in 1978 it had about 20 members. It now has more than 130 and continues to grow.

It wasn’t until we went to a wedding showcase evening at Dunston Hall that we even considered having a Toastmaster at our Wedding but once we had met Bob our mind was made up. 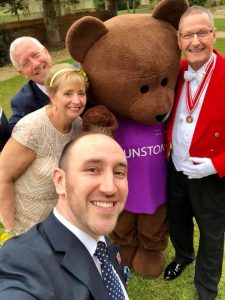 He made our day go without a hitch. He came to the Church to make sure all our guests were happy and stayed wi…

Bob Lloyd was a special person to have at our wedding. He is a very professional, polite and dedicated man who will make your day run smoothly. He made sure everything went to plan and made our day exceptional. We would highly recommend Bob to be your Toastmaster as he did a fantastic job at ours.

If anyone is thinking of having a toastmaster on their wedding day Toastmaster Bob is one of the best things we booked. 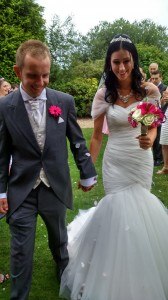 I fully recommend Bob 1000% as he made our day easy and smooth going. He’s so friendly and everyone praised him to the max. We can’t thank him enough. If we could d… 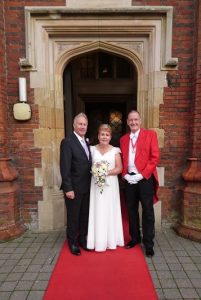 We would like to thank you for making our wedding last Saturday such a joyous occasion. Without your commanding presence we would have been completely submerged. Thank you.  Shelia & Pete

Bob has always been a wonderful supporter of our charity Keeping Abreast, assisting us by acting as master of ceremonies for a number of our key events most recently our annual ball. He is professional, entertaining and due to his mass of experience, is very much in control which helps any event run… 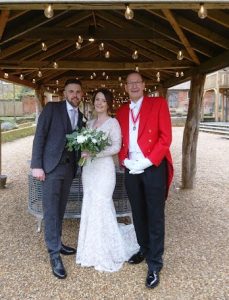 Bob made our day so much more enjoyable! Our guests loved all the little extra touches especially the children!! 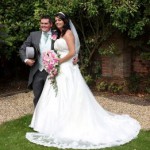 What can we say? Except a very big thank you to you Toastmaster Bob, for the services given at our daughters wedding at Dunston Hall. You were the icing on the cake, taking all the stress away from us, ensuring our daughter Erika and new husband Craig Davies day went with out any hitches. Well worth… 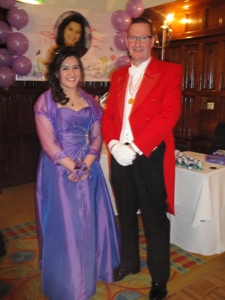 Dear Bob,
Sophie and I would like to express our gratitude for your flawless service during our wedding.  You made the entire day flow beautifully. It was fantastic to have someone to ask to sort any issues on the day and a point of reference for all guests.
Once again thanks for everything. 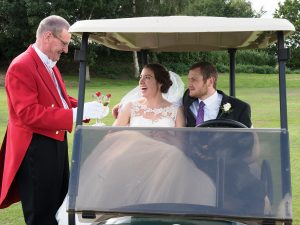 Bob was very warm and friendly from day one. We all got on well and could contact him and ask anything. When the day finally came he was amazing with all our guests with his professionalism and witty sense of humour. Thank you so much for making our day run so smoothly.